Hit enter to search or ESC to close
#circle#sustainability

Natural Dyes – Everything we know so far

Textile Dyeing can be traced back to the Bronze age in Europe between 3000 BC -1200 BC. Dyeing methods have been evolving with time since then, they have become more sophisticated with exposure to scientific procedures. Natural dyes run the gamut  from crushed fruits, berries, and other plants, to extracts from animal and earth minerals. These materials yielding dyes are called dyestuffs and were usually boiled into the fabric and it made the fabric light and water resistant.

Until the mid-19th century, all dyestuffs were made from natural materials, mainly plant and animal products. After the Industrial Revolution synthetic dyes were discovered and the dyeing process started involving complex, specialized science. Nearly all dyestuffs are now produced from synthetic compounds. Synthetic dyeing still rules a major chunk of the market because unlike natural dye synthetic dyes come with many advantages, such as quicker and larger production turn-over, larger colour palette, lesser cost, easier application, and enhanced wearability characteristics. The introduction led to a decline in the commercialization of natural dye until the 20th century.

However, recently with increased awareness of the impact of chemicals on the environment, the 21st century saw the comeback of natural dyes. Apart from being eco-friendly -since natural dyes come from renewable resources and don’t scar the environment. The process of extraction of these dyes also contributes to rural economic development by generating employment in the rural areas.

Many practitioners and appreciators of this craft maintain that natural dyes have a far superior aesthetic quality and that the way these colours age is a “true to life’ experience.

On the other hand, many commercial practitioners still feel that natural dyes are non-viable on grounds of both quality and economics, hence are hesitant to invest in the promotion of natural dyeing.

Actually the knowledge required for sourcing and extracting such dyes and mordants* is, however, often not understood well enough, as extensive research work is required to identify suitable plants, minerals, etc. Brands and companies should collaborate with government support and profusely invest in such research projects. 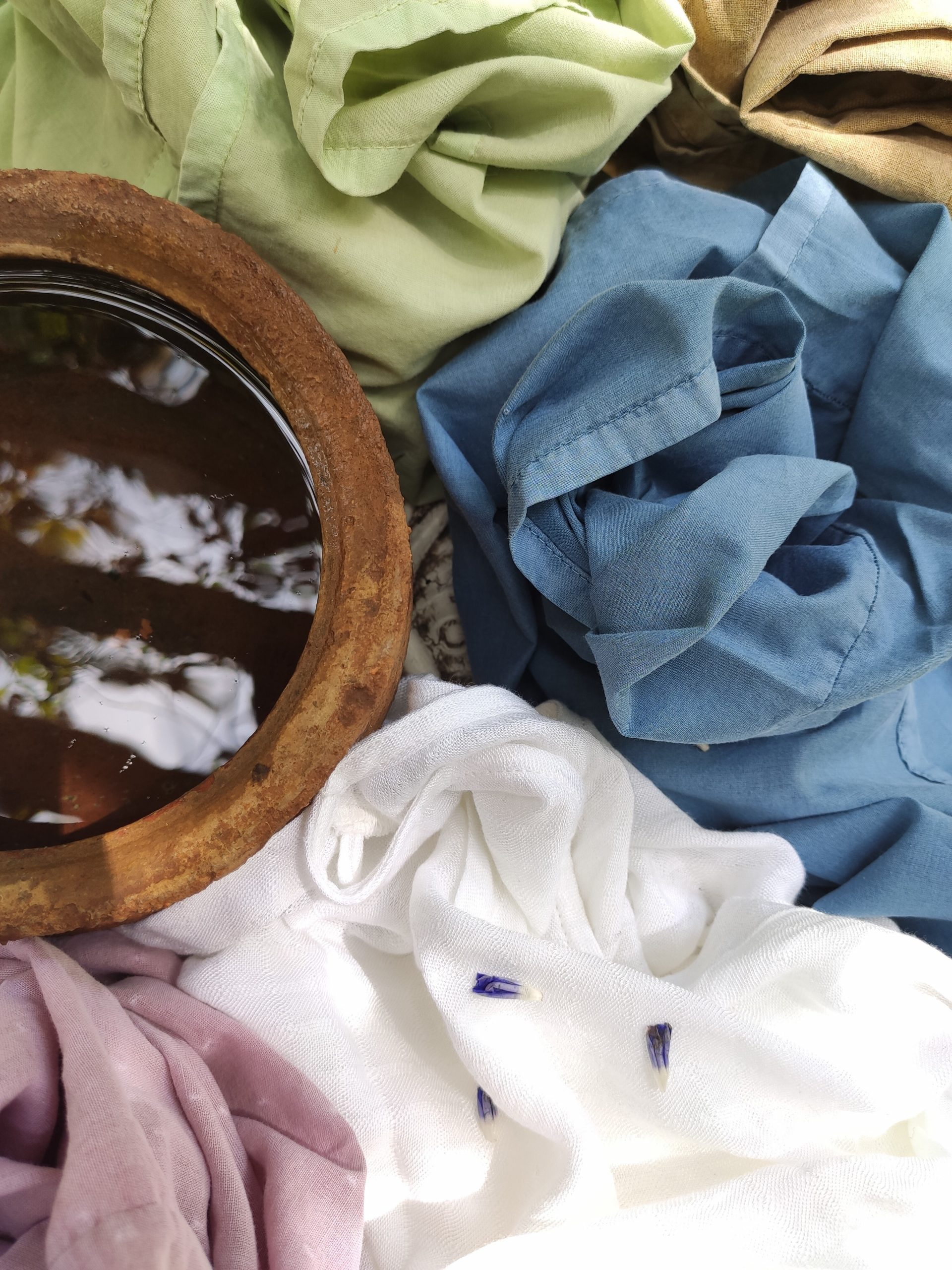 Our experience as an R&D team, with Natural dye, has been quite full of  colourful learning.

The design team at ID has worked with Natural dyestuff extracts from all possible known origins, including plant-based dyes, dyes extracted from animal shells and earth minerals dyes . We have worked on Garment dyeing solutions at IDEPL-9, Hindupur, with mineral-based dyes and the outcome has been aesthetically and commercially pleasing and has received positive feedback.

This project is very close to our hearts as we understand the value it holds in helping ID reach its goal of 99% sustainability  by 2025.

Our ongoing journey on this path continues to challenge us while inspiring us to strike and maintain a balance between commercialization and sustainability in the world of fashion. It has indeed also been an awakening to the less-explored treasure of our planet and to the fact that earth is fairly capable of doing damage control if we humans decide to cooperate with nature and respect it. It has provided us with an understanding that what we perceive as it’s “commercial shortcomings” are in fact the characteristics that need better appreciation.

On that note, we urge you to read the article in the  link below published in The Guardian.

There’s no ‘deadline’ to save the world. Everything we do now has to pass the climate test.

To give you a crux of what’s in there –

“You may have read that there are just eight, or 10, or 12 years to save the world from the climate crisis. There are not. It is already here, gaining strength every day as carbon emissions pour into the atmosphere. It is a slow-motion disaster. Action to avert the worst should have started last week, last year, last decade….”

* Mordant is a chemical compound that combines with the fiber and the dye-forming a chemical bridge between the two, works as a color fixer.